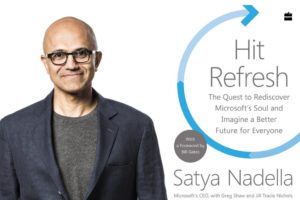 In “Hit Refresh” Microsoft’s third CEO, Indian-American Satya Nadella grapples with the notion of automation-related increases in productivity eliminating jobs. He is optimistic about the future of human work.

“Finally, questions are being asked about whether this next industrial revolution will be a jobless one. To help us investigate this questions, MIT economist Daron Acemoglu visited our campus to report on his research into the effects of technology automation on labor. He found that new intelligent machines, particularly industrial robots, could have very consequential effects on the labor market. His estimates suggest that, on average, each additional industrial robot reduces employment by about three workers. This suggests that, without any countervailing changes, the spread of industrial robots could have very adverse consequences for jobs and wages. Nevertheless, Acemoglu argues that other powerful changes triggered by this onslaught could at least partly reverse these consequences. As machines replace labor in some tasks, firms will be incentivized to create new tasks in which humans have a comparative advantage. Acemoglu sums it up this way: “Although automation tends to reduce employment and the share of labor in national income, the creation of more complex tasks has the opposite effect.” Throughout history new classes of workers and new more complex tasks have resulted form cutting-edge technologies. Acemoglu continues, “The creation of new complex tasks always increases wages, employment and share of labor. But when automation runs ahead of the process of creation of new labor-intensive tasks, technological change will bring lower employment.” We need a balanced growth path. We need to invest a new social contract for this age of AI an automation that fosters the equilibrium between individual labor–one’s agency, wages, sense of purpose and fulfillment–and return on capital.”

“Some argue that robots will take all our jobs, but this so-called “lump of labor” argument–the notion that there is a limited amount of work available–has always been disproved. It’s just that different types of labor will be needed. And humans will add value where machines cannot. As we encounter more and more artificial intelligence, real intelligence, real empathy, and real common sense will be scarce. The new jobs will be predicated on knowing how to work with machines, but also on these uniquely human attributes.”